The Benefit of Working At Reviber

For nearly twelve months now I’ve been making a conscious effort to use, explore and develop my knowledge of Reviber Products.

It began with me taking part in the Reviber 6 Week Challenge. I used the Reviber Fusion Toning Plate and the Vibrating Foam Roller. I lost some weight, gained some strength and worked out some niggles and pains in my back. blog/completing-the-6-week-challenge/

I’ve used the handheld massagers too, but I’m lucky enough not have any pains to treat with them. In fact, I can honestly say I’ve been in pretty good health for a while now and have to credit it with regular exercise and an increasingly healthy diet.

But all that changed last weekend when my eight-year-old son bought himself a kid's SmartWatch. Vtech Kids SmartWatch

He had some money saved up and had used a friend's SmartWatch and was blown away by the pedometer and a cute little feature where the user will run over a set time and the watch will tell you what animal you run like. There’s a dog, a horse, Roadrunner etc.

So we went to a rugby field and did a session of running together. Like any parent, I’m delighted to see my sone wanting to run and put his legs to the test. I put my runners on too and we started running back and forth of the rugby pitch.

We ran from post to post to see how much under a minute he could do it in. We’d check the time and go again and did it until it was clear he was goosed and would only get slower because he’d used the best of his stamina.

We ran back and forth ten times. That’s two kilometres, not far at all, but he was huffing and done from running at full pelt on those lengths. I felt confident he’d done enough and we headed home.

I’ve been exercising regularly for a while now. I cycle to and from work and use the Reviber Fusion 6 Week Challenge to work my body. But I haven’t run at all for ages. And the little sprints I did with my son were no problem for me. To be competitive Dad I could stay in front and call out encouragement to the little guy and the SmartWatch told him he was running like a Roadrunner!

The following morning I felt aches in my calves that I hadn’t felt in a long time!

It’s because I hadn’t run like that for over a year and my calves were telling me. Great! I could use a Reviber Vibrating Foam Roller and see what a difference it could make! 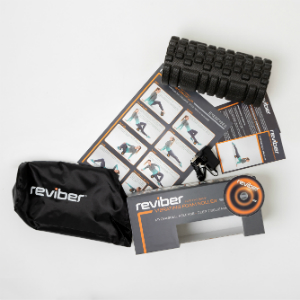 And what a difference it does make! It’s certainly not a roll once and the aches have gone. I rolled my lower calves over the muscles and just above them. There was an instant, but not permanent relief. I rolled and walked up the stairs without the tight feeling in my calves.

It didn’t last, I was uncomfortable again later as I walked around the supermarket, but I rolled again when I got home and rolled those tensions away. Same again first thing the following morning and I was good to go! 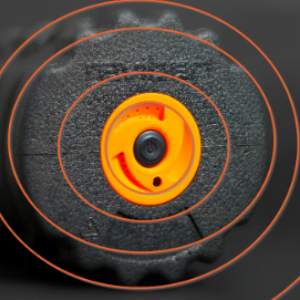 So I’d released the tightness between the muscles from running and finally been able to use the Reviber Roller to recover.

I’m not a fan of running, but I think I’ll be doing more of it thanks to my son and his SmartWatch!

At least I know I’ll be able to recover faster with the Reviber Vibrating Foam Roller.

This stuff really does work!