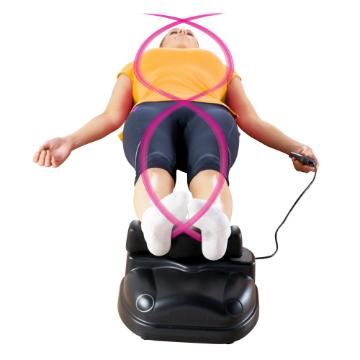 Matthew Whale is a member of the British Osteopathic Association and Fellow of The Royal Society of Medicine. Previously an anatomy lecturer, Matthew is a prolapsed (slipped) intervertebral disc specialist. His other specialities include neuro-musculo-skeletal & pain differential diagnosis; and the treatment of chronic fatigue syndrome.

The following material is strictly copyrighted.

One of the unavoidable facts of life is that the human body dislikes inactivity. The body is designed to move, stretch and twist, but perhaps because of our increasingly sedentary lifestyles, many people’s bodies are not receiving the level of activity that they need and were ultimately designed for.

The human body functions optimally when all its tissues and structures receive a rich blood supply, as it is through that supply that the tissues receive their nutrition. This is essential in order for the body to work correctly, as well as maintain its overall health and the ability to repair any damage created by going about our day-to-day activities, not to mention any additional stresses we may place upon it by playing sporting, etc.

Within the body, certain structures such as skin and relaxed muscles have a relatively rich blood supply, however, other tissues such as joints, ligaments and tendons have much poorer blood supplies and for them, movement is essential in order to ensure that oxygen and nutrition reaches them.

In the spine, the joints between the bones (called ‘vertebrae’) are separated by discs of spongy material that resemble jam-filled doughnuts (called ‘intervertebral discs’) and they give us our ability to bend and twist; without them, our backs would be like a solid, immoveable rods.

The discs are a wonder of biological engineering, however they have one major failing – they have an almost non-existent blood supply (at least in adulthood). So how do they receive their oxygen and nutrition? Well the discs act like sponges – if pressure is applied to them, fluid is pushed out, whereas if the pressure on them is released, they draw fluid back into them – and it is that fluid that supplies them with the oxygen and nutrition that they need. That process is reliant upon us providing adequate movement to our spines.

Much research over recent years has sought to understand how these mechanisms work and although still in its relative infancy, science is now showing us that motion is imperative for maintaining and promoting the healing process throughout the body.1,2,3,4

For example, one investigation has shown that synovial fluid (the lubricant inside most mobile joints) is negatively affected by a lack of movement, whereas these changes are corrected once movement begins again.5 Similar research has also shown that even small amounts of movement are sufficient to stimulate the production of cartilage in degenerative joints, which is important, as it is that cartilage (along with the synovial fluid mentioned above) that gives the joints the ability to ‘glide’ smoothly, without pain or restriction of movement.6

The Reviber Bodywave Pro has the potential to address these needs. It is a machine that provides gentle rhythmic rocking (termed ‘oscillations’) to the body, the possible benefits of which are numerous. It is classified as a Continuous Passive Motion (CPM) device and such pieces of equipment were originally devised to aid patient rehabilitation following surgery or trauma, by constantly providing passive motion (movement where the patient takes no active part), the aim of which was to reduce inflammation, thereby reducing pain and protecting the healing tissues as they repaired. This is achieved by increasing movement of fluid in and around the affected tissues, to allow for better movement of nutrients into damaged tissues, whilst at the same time encouraging diffusion (movement) of other materials out, such as inflammatory chemicals.7,8,9,10,11

Studies have also shown that passive mobilisation can increase lymphatic fluid movement and reduce oedema (fluid accumulation).12,13,14
One piece of research which was based upon a machine very similar to the Bodywave Pro showed that lymphoedema (a condition of localised fluid retention and tissue swelling caused by a compromised lymphatic system affecting predominantly the lower legs), which was caused as a side-effect of cancer treatment, was very effectively treated; the effect of which was not only limited to the legs, but the treatment appeared to have a whole body effect at increasing fluid movement.15

It is a fact of life that nobody’s spine is in perfect alignment, as day to day activities take their toll on our posture and our body’s ability to adapt to the demands placed upon it. These poor posture patterns are maintained by uneven muscle patterns that develop in part because of our occupations or the activities that we undertake. For instance, sitting at a desk or behind the steering wheel of a vehicle for long periods of time affect our bodies in fairly specific ways, including the development of a poor ‘slouching’ posture, as well as tightening of various muscle groups, not only in our backs, but also elsewhere in the body, such as neck, shoulders, pelvis and legs. Heavy manual labour will quite commonly develop uneven muscle tension patterns, as well as accelerate degeneration of various joints, including those in our spines. Single-handed or one-sided sports such as tennis, badminton or golf will also cause one-sided muscle-tension patterns due to the fact that you are using one side of your body more than the other.

It is the job of a manual medical practitioner (such as an osteopath, chiropractor or physiotherapist) to undo all of that inappropriate tension; however, if your lifestyle is a contributory factor, there is a limit to how much the therapist can achieve without a considerable amount of input from the patient.

This is where the Reviber Bodywave Pro potentially comes into its own.

The oscillations (rocking) induced in the body by the Bodywave Pro are similar to those produced by manual medical practitioners such as Osteopaths using their oscillatory or harmonic techniques. Such techniques have been used almost since the inception of Osteopathic medicine over 150 years ago and are still being practised and taught worldwide today. 16,17

It is beyond the scope of this article to explain the theoretical mechanisms by which harmonic or oscillatory techniques work, suffice to say that the result is the relaxation of those inappropriate muscle tension patterns mentioned above, improving posture and function, as well as reducing pain or discomfort.

Much of the chronic back pain that many people suffer from has been shown to be attributed to an inability to relax, both physically and mentally. 18,19 Rhythmic, oscillatory movements appear to have a calming effect on the human central nervous system. Many parents will attest to having to gently rock their young children or drive them around in the car, in order to get them to fall asleep. Even in adulthood we can still be profoundly affected by this relaxing rocking motion. For example, just think about how relaxing a rocking chair or garden hammock can be.

It is something that is fairly instinctive, but until recently a medical explanation has appeared illusive; however, science is showing that there is a physiological basis for its effect. Research has shown that rocking induces relaxation, improves the quality of sleep, improves the perception of the relaxation produced and positively alters brain-wave activity associated with relaxation and sleep. 20

The Bodywave Pro appears to have a similar effect and research conducted in 2005 with 145 participants, using a very similar machine showed 58% felt less stressed, 65% felt calmer and more relaxed, with 73% having an increased sense of wellbeing. 2 1 It is not unreasonable to hypothesise that this effect may be attributable to similar reasons as the previously mentioned research.

This may have further reaching effects, as by inducing a sense of relaxation, it may affect the levels of stress hormones (produced when people feel tense), reducing muscle tension and dilating blood vessels - which may explain the ‘tingle’ that most people get when using such machines. As relaxation is associated with a reduction in blood pressure22, the use of the Bodywave Pro as a therapeutic intervention in the regulation of blood pressure is an area of potential future research.

Combined with the potential relaxation discussed above, the other benefit of the Bodywave Pro is that as you use it lying down, it has the great advantage of applying continuous passive motion without gravity acting on the postural muscles (the muscles that help to maintain our posture when we are sitting or standing), so they can relax, allowing the gentle movements to occur with minimal resistance.

Research on physical therapies that use rocking and oscillations as part of their therapeutic regimen have been shown to have a significant effect in reducing chronic headaches, whilst at the same time reducing the dependency on the use of pain-relieving medication.23 In a similar way, the Bodywave Pro may help with headaches by inducing a sense of relaxation and reducing muscle tension, especially of those muscles in the neck and base of the skull (sub-occipital muscles), which are a common cause of both chronic and acute headaches.24

The Reviber Bodywave Pro In Use

The machine is relatively small, low-cost and easy to store, so it already has an advantage over the larger and more expensive pieces of equipment available. This is an important consideration as if you are in pain, recovering from illness or surgery, disabled or elderly, as to be practical, most people will only use a machine that is easy to use, easy to move and easy to store.

To use the Bodywave Pro, the user lies down, preferably on a comfortable surface, with their ankles raised up on the padded ankle cradle. When operated, the cradle gently rocks the user from side-to-side at a variable rate (frequency), inducing a rhythmic side-to-side motion to the spine. The gentle movement also goes through the ankles, knees, hips and sacro-iliac joints (pelvis), as well as the small (facet) joints either side of the spine, increasing fluid dynamics (movement) through and around those joints, increasing nutrition to the joints, helping to maintain their health (as described earlier).25,26

As the Bodywave Pro allows you great control over the frequency of the oscillations that it produces, the treatment can be customised and applied specifically within the users comfort level, which also makes it applicable to those who are already in discomfort, are recovering from injury or are more elderly or frail.

Finally, as the Reviber Bodywave Pro is usually used fully clothed and the treatment is provided in relatively small amounts of time (from 5 to 15 minutes, once or twice per day) the therapy is very adaptable and can be tailored, dependent upon the user’s lifestyle.