Spoiler alert! I can do push ups now, lots of them

My name is Patch and I’m part of the team at Reviber. At Reviber we sell fitness and therapy equipment designed to fit in and assist your busy life. Recently I began to reacquaint myself with the products we supply as a way showcase some of the benefits of Reviber products and what they can do for you if you use them.

I’ve always had a secret. I have never been able to do push ups. When I’ve talked with friends about doing a bit of exercise and the subject of push ups came up I’d shrink back and mumble something about being able to do about ten. But the truth was I couldn’t do more than five. Two max. Actually not really even one. OK, none. There I’ve put it out there. What a weed. 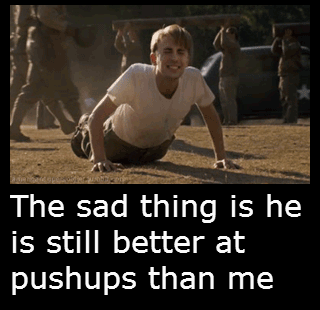 I used to pop on some YouTube videos on how to do a set of push ups and I’d watch and then do a push up and fail. I decided that push ups served no purpose and that I was better off without this useless skill set and I’d be fine without the ability.

But that’s not really true because I actually wanted to be able to gun out a set and get some strength in my arms, upper back and tighten up my chest, so I was lying to myself and ignoring the fact that this exercise would help me get to where I wanted.

I had no idea that the answer to my prayers would come from using a toning plate of all things. Toning plates are for standing on and shaking your legs and butt right? You grab the resistance bands and do some arm work and that’s it? Well that’s what most toning plates offer. Stand on me, let me shake your loose bits and tone you up. Well it turns out there is a lot more that can be done with these machines and one of the many things you can do is a variety of exercises that will train you to get strong enough to do push ups. Read on to see what I did to go from not being able to do push ups to being able to do push ups confidently and be able to do sets of them one after another.

It all began a short time ago when I volunteered to to take part in a 6 week trial using our own Reviber Fusion Oscillating Toning Plate at work to get some knowledge of the machine for sales purposes and to document the 6 week journey in the work blog to let customers know what the Fusion was capable of delivering if they stuck to a set of exercises.

I was put through a variety of exercises including standing on the plate, using the resistance bands, doing squats, lunges, sit ups and most interestingly, push ups.

I was really keen to do the sit ups and push ups to work the body area. All the exercises contributed to overall toning, but the sits and pushes were the target specific area, but I’ll focus on the pushes here.

I was put into position to do the first set of push up exercises. 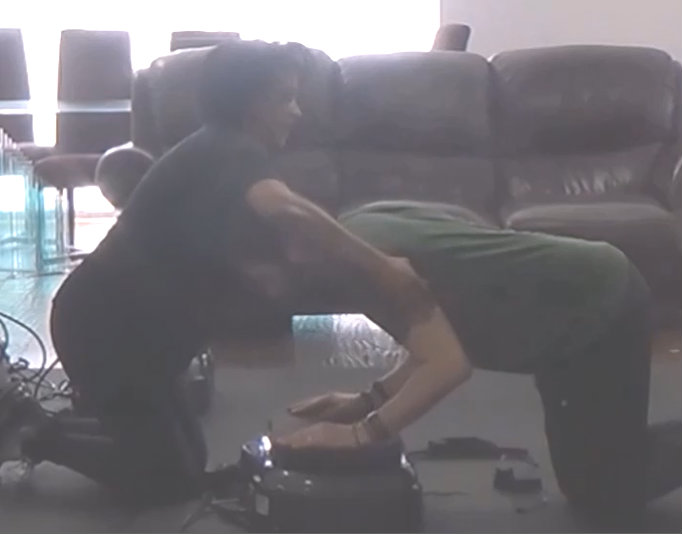 Literally adjusted into position by our in house Fitness Consultant Marlene and was shown how to do a Tricep Hinge Press. Luckily for me I was kept on my knees for this and didn’t have to do the full push up position and die a horrible shameful death.

Once I was put into position I had to do 3 sets of 8 Tricep Hinge Pushes. These are not the traditional up down push ups. You tuck your elbows in along your ribs and hinge forward over the Fusion. All while the Fusion is rocking from side to side, its vibrations making your arm muscles and chest work along with the physical hinge push. After 3 sets of 8 my triceps in the back of my arms are really feeling it. Even though I’m on my knees I can feel the effects. On my own I do the workout twice more through the week and report back to Marlene for week two.

More Hinges. In Week 2 all the sets are increased from 8’s up to 12’s. I’m still doing the kneeling hinge action and the increase from 8’s to 12’s is tough but I’ve gained some strength to manage this. Baby steps towards push ups!

Week 3 stays the same at sets of 12’s. As well as the hinges I’m shown how to plank on the floor. Next week I’ll be planking on the Fusion, holding the position while it shakes me too! I plank after each set of hinges for 30 seconds. I do the plank to strengthen my core, my back and abs. Holding this position is great preparation towards doing push ups.

It all changes in Week 4. The Tricep Hinge Push is gone and the Sided Push Up is in. I place one hand on the centre of the Fusion and the other hand of to the side of the machine. I’m still on my knees, but this is the closest I’ve ever been to sets of push ups! I’m doing 16 on one side, 16 on the other and then planking on the machine for 30 seconds. I repeat this for 3 sets. The arm that is on the plate for the push up is feeling the vibrations and is under more pressure because it’s raised higher off the ground than the other. Throughout the week I really double down on these sets because I can feel change in my chest and arms and I’m beginning to believe that I might be able to do push ups soon! 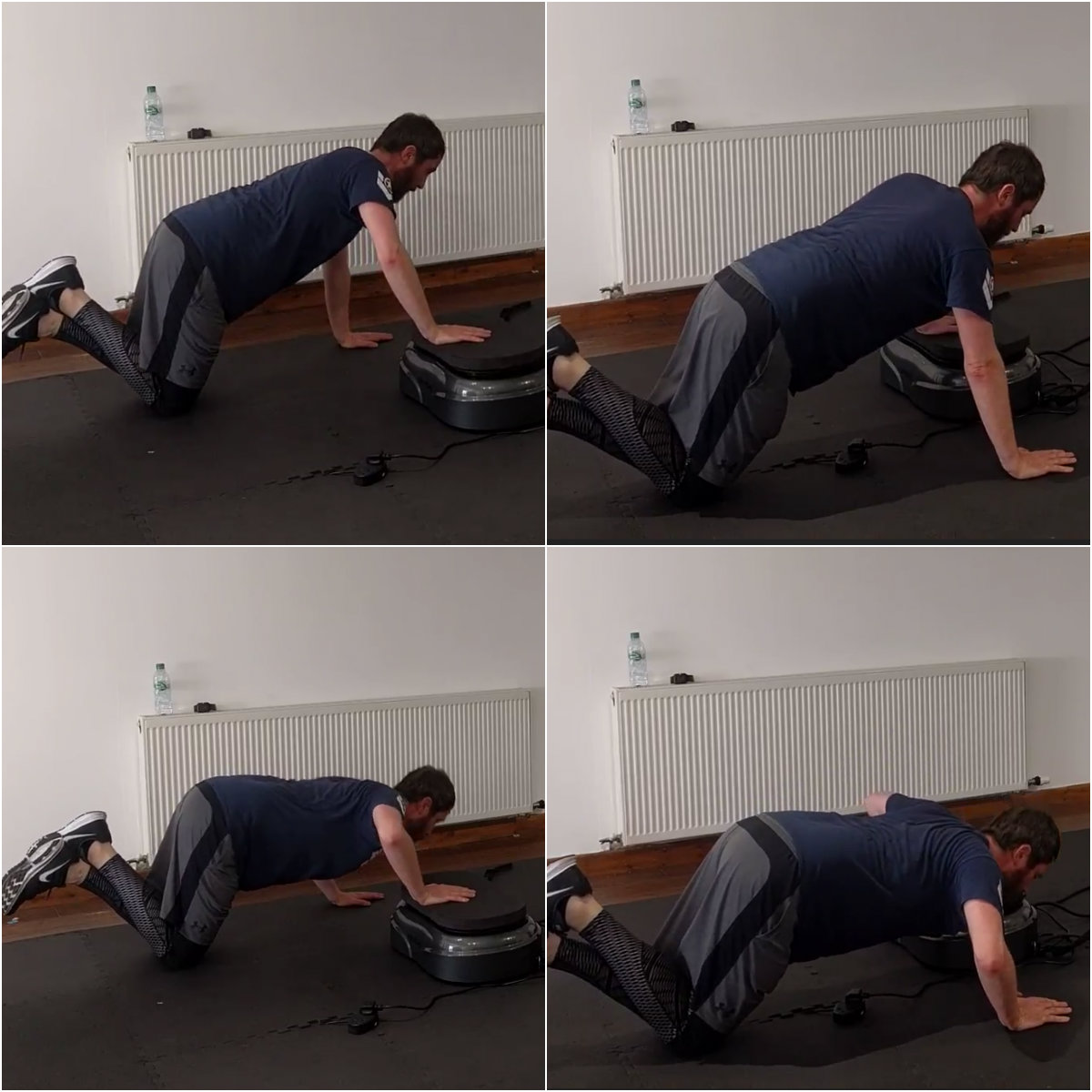 Week 5. I repeat the same 3 sets of 16 and I increase the plank form 30 seconds to 40 seconds. I push myself as close to the ground as possible and push back up as strongly as I can.

Week 6. Here it is. The day has come. Throughout this trial I’ve trained all areas of my body using the Reviber Fusion in a variety of ways. The push ups have all been done ‘softly’ on my knees up to this point. Each week I have had a training session with Marlene and have been shown what to do, then throughout the week I’m working out twice more alone. It’s all added up to me toning up, looking slimmer, feeling better and generally gaining a level of fitness that I’ve not had for such a long time. 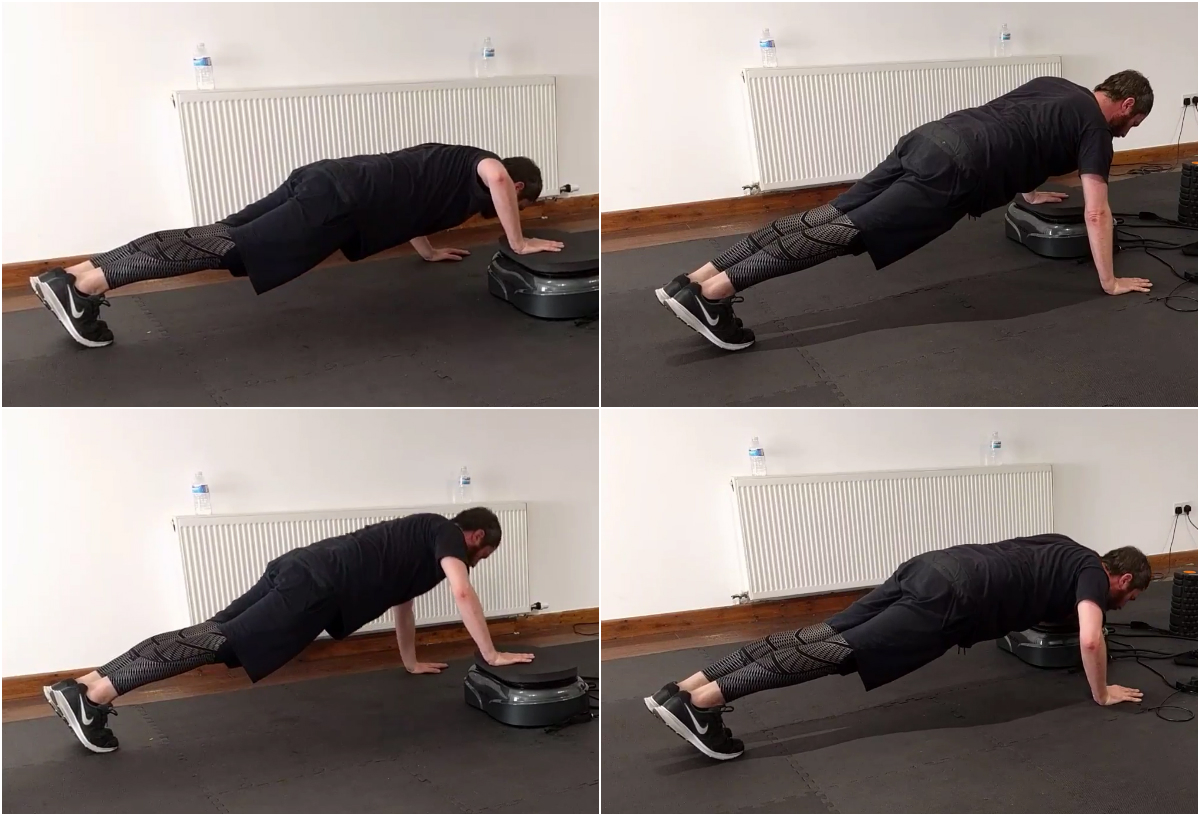 OK, I’ll admit, for the documentation of the 6 Week Trial I was filmed doing the exercises and when I looked back at my first set of push ups that I’ve seen that they’re not the most impressive looking push ups, but they are push ups. Real push ups done by yours truly! I nearly collapse on the last few, but control my breath and keep at it.

Of course, there’s 3 sets of push ups and planks to do. I’ve managed a full set but have to do the second and third on my knees. As I work through the sets in the week I manage to do the first set again and then do 8 full push ups and then drop to my knees for the other 8 on each side. I’m claiming that as one and a half sets! 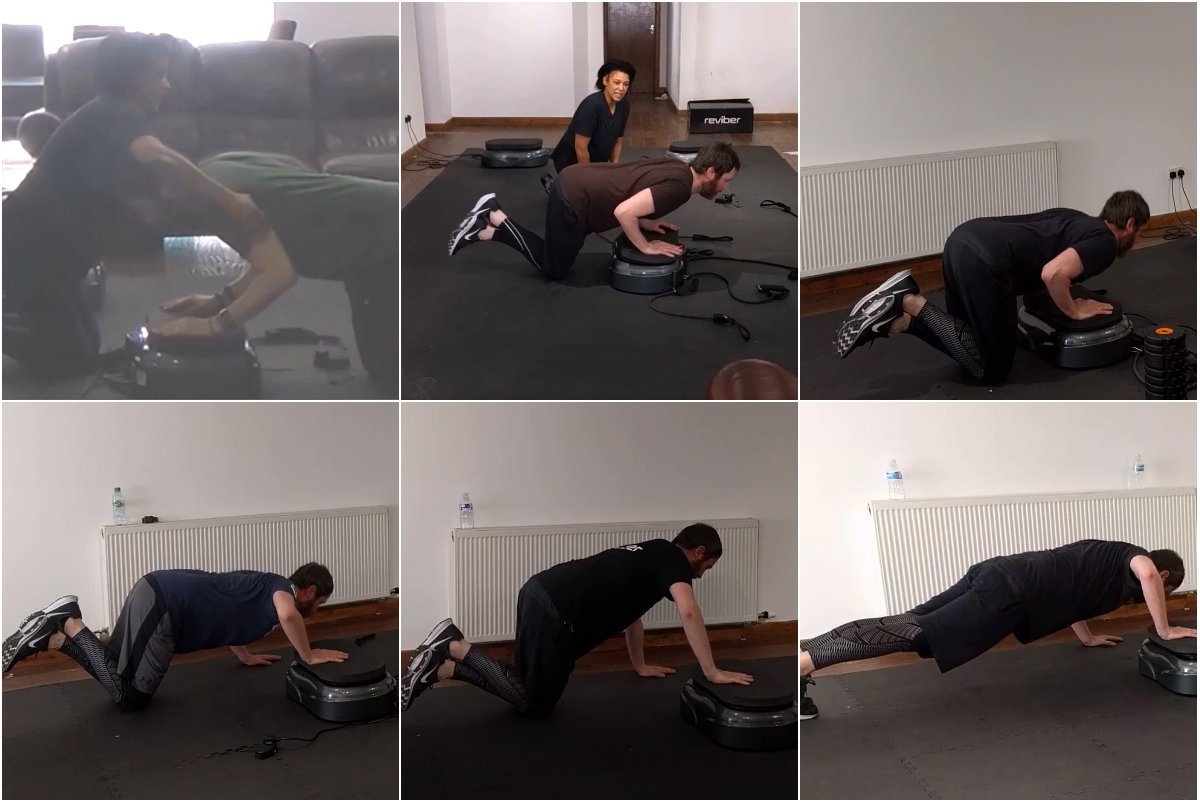